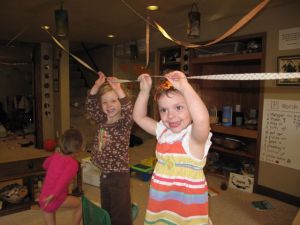 Discordance and synchronicity walk closely in young children’s relationships.  Mutable dramatic play scripts pouring out of collective imaginations require sophistication to sustain.   Incorrect assumptions assign malice where none is present in block tower topplings.  At one moment, my friend and I are destined to remain friends forever, wedded bliss assured.  At the next, the mere sight of each other elicits stomping and yelling.  Consider the high-level social skills required for relationships: the ability to read body language and tone of voice, pick up on the subtleties of a heavy march or a raised eyebrow, or recognize internal states of being and a working vocabulary to aptly describe those moods.  When day-to-day business revolves around pair and group play, consistently reading what my friends are verbally or non-verbally communicating insures that I am either in or out.  And out is about as bad as it gets.

A year ago, I read You Can’t Say You Can’t Play – a powerful and thought-provoking read.  Author and educator Vivian Gussin Paley worked with her group of kindergarteners to understand the implications of peer exclusion, and over the course of the year, the group developed the rule: You can’t say you can’t play.  Even after finishing the book, I remain unconvinced that a rule can engender positive and meaningful relationships between children.  How does such a rule respect a child’s need for small moments with one or two friends only?  As an adult, there are times that I choose to work alone, or with specific people for specific projects, and if someone came in from outside the project and informed me that I was required to involve others in my plan, I might not respond so positively.  Or, I would appear to respond positively, and grumble internally at the command – making participation for this intruder so unpleasant that leaving would be appealing.

Despite my misgivings, Paley’s work has my high esteem – she listens respectfully to the children, and wrestles sincerely and honestly with the problems that arise among the group.   Exclusion hurts, and sparing victims from that lasting emotional pain, and freeing aggressors from the pressure to maintain positions of power resonates deeply in my being.  In Paley’s situation, the rule’s effectiveness stems from the context of its origination: respect and listening.  Extracting the rule from its context and imposing it on just any group without careful work would be foolish, and (I assume) a disrespect to its espousal.  Still, rule or not, scaffolding the delicate friendships in early childhood settings is critically important work!

At Abundant Life, we have three guiding statements that frame our interactions:  I take care of myself.  I take care of my friends. I take care of my space.  Just about everything falls under one of those guidelines.  Recently, I have observed a shift in the friendship dynamics in the group.  As younger members have grown up, acquiring the skills to enter the dramatic play scripts and stay successfully in, the two oldest have started to feel more competitive about whose ideas will win the biggest following.  Both are strong leaders, and both are learning that flexibility can pave the way for a group of friends to play together while inflexibility can mean isolation.

A few days ago, the group began to include sloths in their dramatic play.  I observed Tekoa and Cadence this morning as the head sloths – the mommys or the daddys or the princess sloths, or the ballerina sloths…I’m not clear what type of a sloth they were, just that their role as head sloth gave them the power to decide if it was morning or night, mealtime or playtime.  Tekoa was pouting, and as I watched more closely, I discovered the problem.  Cadence had four sloths at her disposal while Tekoa had none.  The Cadence sloth pack was stationed in the tiny space under the stairs while Tekoa was looking to set up her sloth home near the cots.  Tekoa kept venturing over to the Cadence pack and trying to allure them over to her side, offering all kinds of joys and benefits from her greener side of the hill.  Cadence just kept pounding the drum mallet on the wall (the sloth signal for waking or sleeping), and her sloth pack kept dutifully laying down or sitting up (sardines in this tiny space) depending on if the drum beat was signaling morning or night.  This is what was happening on the surface.  Underneath the sloth play, Tekoa wanted a friend, but was unwilling to compromise her play vision.  Cadence was unaware that Tekoa wanted a friend – she only saw another sloth, trying to move her sloth bunch who she had so carefully trained to wake or sleep on beat.

In Developmentally Appropriate Play, Gaye Gronlund offers some excellent instruction to educators on how to effectively enter play in order to support the players.  Using some of the strategies from this book, I entered the play with Tekoa and worked to bridge the gap in relationship that was forming.  First, I knocked at the sloth door and tried two different options to see if Tekoa would be accepted into Cadence’s sloth family.  I received affirmation from Cadence both times, only to discover that Tekoa was uninterested in joining the under-the-stairs-sloth-family.  I knocked again to see if Cadence’s sloth family would like to migrate over to Tekoa’s sloth home and join her.  This was not a good plan in Cadence’s mind.  Finally, I voiced the problem to the whole group.

Me: “I see the problem.  Cadence has a sloth family under the stairs and they seem pretty comfortable.  Tekoa likes her house location, but is lonely without any sloth friends at her house.  Tekoa is not interested in visiting Cadence’s group.  Maybe, Tekoa, we can come up with a reason for Cadence’s group to come and visit you?  Should we have a party?”
Tekoa: “Yes!”
Me: “We could make signs and invitations.”
Tekoa: “Yes!”
Me: “Should I go get the sign right now? We could start to set up. Maybe we should see if your friends would like to come to a party.”

Tekoa invited the sloths, who were very excited about a party.  We set a time, and began the work of decorating.  Soon, all of the sloths were busy helping to decorate.  I received a huge a bag of ribbon a few days ago from my neighbor – several wide spools just waiting to decorate a party.  We decided to pull out all the stops for this big sloth gala.  The crew began pulling all of the ribbon off of the spools – seeing how far it would go before it pulled tight, and learning to hold the spool with two fingers through the center hole so the ribbon would pull.  It was a morning of extravagant materials that I will leave up as decorations until it seems time to take them down and store them away for another time.  Frankly, the experience of piling up all of the ribbon and jumping in it was compelling enough as it was…we might have a morning of jumping in ribbon!  As you will see from the pictures, the experiences demanded that we leave our space in chaos to continue the play script (more on my vision for space and order in another post to come later).

In the end, I am convinced that learning to make and keep friends is one of the biggest social learning opportunities in the early years of a child’s life. I am not sure that a rule will support this complex learning; I think it takes the conscientious work of adults listening respectfully to children, and offering meaningful ways to preserve the needs of everyone involved.  As for us?  We had a party.  If you aren’t sure that it is, in fact, a party…make sure you read our sign.

What do you think?  Have you read Paley’s work?  Do you think a rule about inclusion is a good idea?  Share your thoughts below.  Thanks for reading!